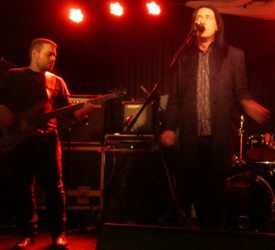 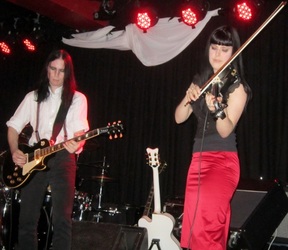 I didn’t know Red Sun Revival before I checked them out ahead of tonight’s gig. A relatively new band – formed in 2011 – comprising of accomplished and experienced musicians, the quartet has already built up a faithful following. Their music is a rather traditional gothic rock, full of sweeping melodies and heavy hearts. Frontman Rob Leydon’s sonorous, emotional voice is delightfully theatrical and suits the music perfectly. As the set goes along, I warm to them and their meticulously crafted, perfectly delivered songs. I particularly like Christina Emery’s violin, which really adds an interesting dimension to the tracks, as on Nothing To Hide, Running From The Dawn or the very Fields of the Nephilim-inspired My Child.

Red Sun Revival’s Rob Leydon is most certainly a much-in-demand musician as he has just officially been announced as a new member of The Eden House, replacing the very busy producer Andy Jackson on guitar.